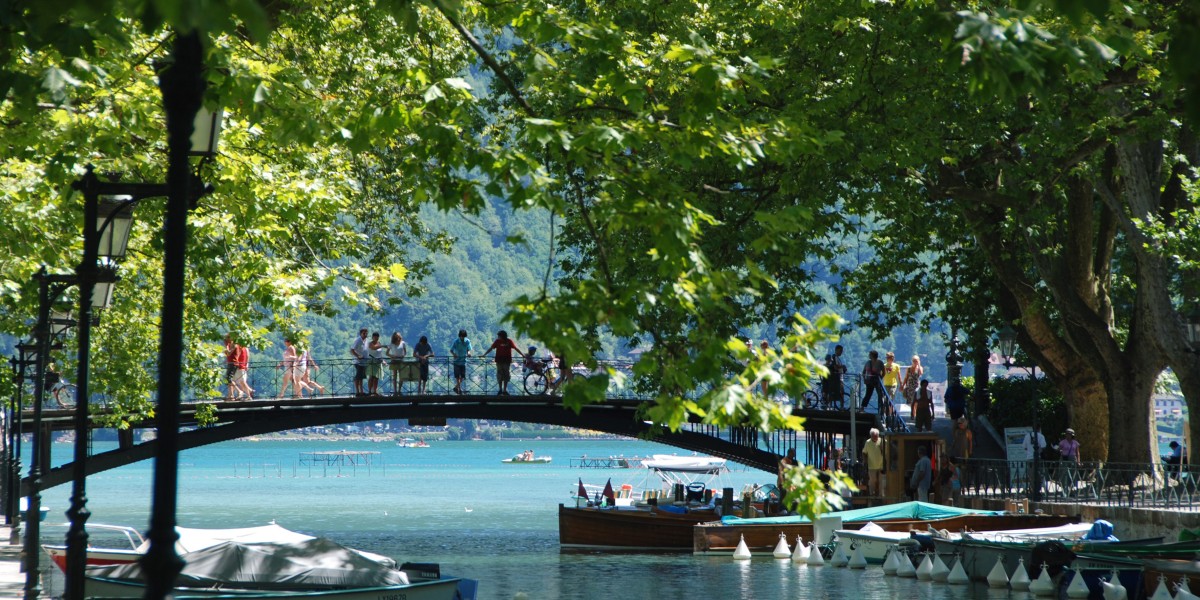 A visit to Annecy, the "Venice of the Alps", 45 Minutes by Les Bauges or by motorway.

The camping du lac de Carouge in Savoie is located at the foothills of the French Alps. There are many possibilities for sports activities on and near the campsite. But if you prefer to visit a beautiful city, we can recommend Annecy.

Close to the water which is one of its natural resources, Annecy has been shaped by it and its architecture is a testimony to this. The old town dotted with traboules, a sort of secret passageways, a tangle of houses are characteristic. The medieval arteries (Porte Sainte Claire, Côte Perrière) which frame the old town from the rest of the agglomeration are still present today.

The city of Annecy is the capital of the department of Haute-Savoie and is located north of the lake of the same name, 45 minutes from the campsite. The city has a little more than 50 000 inhabitants and many sites and monuments. The city is also known as the "Venice of the Alps", or the pearl of the Alps, thanks to its downtown and its canals, it is one of the most beautiful cities even the most beautiful city of the Alps thanks to its lake, its historic city centre and its various places to visit.

We appreciate this historic city and at the same time modern. Stroll along the shores of Lac d'Annecy, laze on the lawns or rent a boat or a pedal boat to navigate on the lake. Of course, there are other places to visit in the surrounding area, especially the Gorges du Fier which we particularly like.

The town has a rich history that began in the early days of our era, when a Gallic tribe already lived here. The Romans who later settled here made it their first settlement with a forum, a basilica, a few temples and a theatre. The city was on a strategic trade route between France and Italy, making the colony increasingly important over the centuries.

In the medieval city centre you can imagine yourself going back in time. Here you will find beautiful old buildings and beautiful streets. The location on the water makes it very special. If you walk through the streets, you will automatically encounter the different sites. The baroque St. Peter's Cathedral from the 16th century is a rather austere but imposing building. The dome and parts of the ceiling are richly painted and are well worth a visit. In the church you will also find various 19th century art objects. Another church that is worth a visit is the Roman Catholic Church of St. Mauritius, the oldest church in the city. The Gothic church has several chapels and a beautiful Mural of the 15th century. The castle of the Count of Savoy, whose construction was completed in 1107 on the heights of Annecy. It became the capital of the county of Geneva in the 14th century, then was given to the count of Savoy. The city finally became French in 1860.

A day of relaxation in Annecy: stroll in front of the shop or enjoy the lake.

In the old town, don't miss the Palais de l'Isle, considered the symbol of the city and one of the most photographed buildings in France. This 12th century building used to be a prison, but today you will find a museum about the history of the city.

Nearby you will find the rue Sainte-Claire with its colourful houses and beautiful galleries. In this street you will find many restaurants, cafes and shops. There are some nice specialty shops where you can buy regional specialties. The narrow and winding streets of rue Sainte-Claire lead you to the 12th century castle overlooking the city. From there, the view of the city is breathtaking. You will find several museums and temporary exhibitions in the castle itself.

Between the old town and the lake you will find a number of large city parks where you can take a walk through the greenery and along the waterfront. The Jardins d'Europe were laid out at the end of the 19th century and are full of beautiful hundred-year-old trees. Together with the ponds and fountains in the park, they provide a lot of cooling in the summer. From the Jardins de l'Europe, cross the magnificent Pont des Amours to the Pâquier. From there, you can continue along the boulevard to the palace of the Imperial Gardens. The imposing Imperial Palace Hotel-Casino dates back to the 20th century and offers a magnificent view of the lake.

Lake Annecy is highly appreciated for its crystal-clear and pure water coming directly from a glacier and an underwater spring. The lake has a surface area of approximately 27 square kilometres and a depth of 80 metres. There are numerous beaches on about 38 km of coastline and a large part of the lake is surrounded by bicycle paths and car-free hiking trails. Although the lake is surrounded by impressive mountains, the cycling and hiking trails around the lake are rather flat and therefore easily passable. The water is of course excellent for various activities such as sailing, diving, water skiing, surfing, kayaking and swimming. The water temperature in summer is about 22 degrees Celsius.

Lake Annecy, one of the most beautiful mountain lakes in the Alps.

Situated less than 40 minutes from the campsite, at 477 m of altitude, the lake is surrounded by the nearby mountain massifs such as Les Bauges (the best road to reach Annecy, you reach the lake at a high altitude, it offers us a most exceptional view of the place) or Le Grand Bornand, come and discover this treasure that is Lake Annecy, with its turquoise blue water. You can enjoy water at almost 24°C in summer.

For the sportsmen, it will be possible for you to go around the lake by bike, rollerblade or even on foot thanks to its cycle track.